Known as “America’s Big Band,” the Jazz Ambassadors are the premier touring jazz orchestra of the United States Army. Formed in 1969, this 19-piece ensemble has received critical acclaim throughout the United States and abroad performing America’s original art form, jazz.

The Jazz Ambassadors have performed in all 50 states, Canada, Mexico, Japan, India, and Europe, and in joint concerts with the Boston Pops, National Symphony, Pittsburgh Symphony, Seattle Symphony, and at Carnegie Hall with Erich Kunzel and the Cincinnati Pops. Appearances at international jazz festivals in Montreux, Newport, Toronto, Brussels, and the Netherlands have been met with enthusiastic acclaim, as well as concerts in England, Wales, Luxembourg, Germany, the Czech Republic, and Norway.

This is a free event and open to the public. Tickets, however are required. They are available at the Defiance Development and Visitors Bureau, The Stroede Center for the Arts (Defiance), The Museum of Fulton County and Welcome Center (Wauseon), and by sending a SASE to Black Swamp Arts Council, P.O. Box 452, Archbold, OH 43502 – Attn: Jazz Ambassadors. Limit 6 tickets per pickup or request. 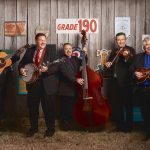 Industrial Strength Bluegrass: An Evening With Joe Mullins and The Radio RamblersArchives